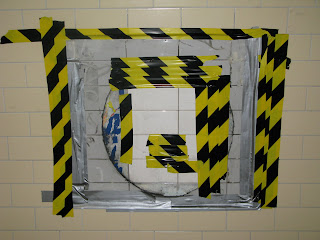 I received this today from my friend Melanie who lives in Paris. She saw this piece in a gallerie in the 6th arrondisement. An artist has set up an Installation Piece of a Metro hall within its walls. In fact the gallerie is located right next to  the Metro Rue du Bac which I guess is where one finds the meaning. I sent her a mail asking her to please let me know which one but I haven't heard back yet.

Personally, I don't really get it with Installations although I have a few friends who are known as "Installation Artists". They are very serious. One of whom is quite (renommé) if I can put it that way (Nelly will hate me for writing about her,,, mais tant pis, I doubt she will ever read this so, what the hell)  Nelly who is Parisienne creates installations which resemble something between a dungeon and 19th century kitchen where women do all the cleaning, ironing and cooking. They are filled with realistic items from old bourgeois homes (maison de maître). They are very convincing down to the smallest of details but one is relieved to find fresh air on the street after walking through of one of her shows. At least that's how I felt each time I went. They are oppressive works to say the least. She is a feminist (duh!) and her work speaks for itself. She is articulate and not without a cagy sense of humour but I cannot broach the subject of why she makes these things. She throws up her hands and says that I am not politically motivated enough to understand. Fair enough, I keep quiet, but I don't feel that I am as politically naive as she claims. I simply cannot defend myself in her presence. I often come back to this question these days: Does one need to be politically engaged to understand a work of Contemporary Art? Recreating a kitchen from the 19th century with precision: isn't it like a painter who copies a photograph with perfection??

But getting back to the Metro Installation, I am really looking forward to visiting it as soon as Melanie lets me know where to go.