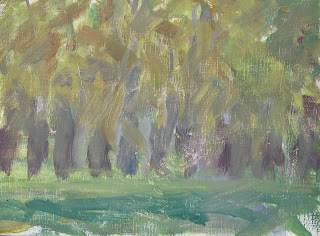 This is what the countryside (paysage) looks like at the moment in the south of France. If one were out and about, one might see something like this. This small work has survived all of my moods over the years. It was done just 25 years ago. Mostly (pour la plupart), I throw things away too quickly, only the lucky painting, hidden away in the studio escapes my temper tantrums. That's one reason its always best to sell things as fast as one can.


Speaking of which, tempers were exploding in the streets of Paris today. The dairy farmers were protesting (manifestant) the drop in the price (prix) of milk. It is a fairly serious issue facing farmers in several European countries. Its all very complicated but basically, they are unable to produce a liter of milk (lait) at profit. So, in France they hit the streets (literally). They turn cars over, burn tires, and throw cobble stones (pavés) at the state police (CRS) while hurling insults. It gets quite rough, and often, someone gets hurt. (No one blinks an eyelid though, unless its the poor kids from the outer fringes of society (la banlieue), then, the French worry (s'inquiete))


Being an American, I am always amazed at this civil disobedience. I have never gotten used to it. Throwing a stone at a cop in America would get you into serious trouble, enough to put you in prison if caught, or if the cops (flics) got a hold of you it wouldn't be fun (amusant). A friend of mine Carlo (an italian), tried to explain things for me not too long ago:


"You don't get it, for these guys, the STATE is everything, its like their Mother, and, they have been promised things. ,,,, and, they expect to be heard and taken care of. All the unions (syndicats) have the right to protest.... picking up a stone and chucking it at the police is ritual, a rite of passage, a rite of manhood (virilité)."


Needless to say this an unheard of proposition in the States. We are mostly a law abiding peoples. Perhaps we are just afraid.


Meanwhile, the trees (les arbres) are still blue here in the south of France, just the way Cezanne and Van Gogh painted them.