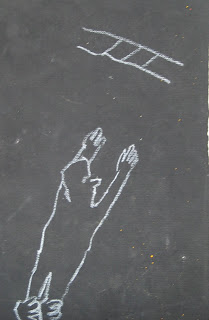 I read an article in the Times today about the a wave (vague) of kidnapping in Kenya. They are no longer targeting just "the rich", but anyone and everyone. Recently, a 6 year old boy was killed, his head smashed in and his eyes gauged out all because his poor (pauvre) family couldn't pay 70 dollars to the killers.


There are times, often, it seems, when one is just sickened by the awful violence in the world. Many of us read about it from from places of cozy privilege. Here in the countryside of france these kinds of crimes are rare. This a civilized landscape  mostly beset by increasingly high unemployment and high anxiety. The urban zones (les cités) encircling Marseille, Lyon, and Paris are rife with gang violence. There has been a wave of of it claiming the lives of young, mostly black/north african (maghrébin) kids. Ten years ago, firearms (armes à feu), were almost unheard of in such populations. Today, a Kalashnikov goes for around $180, a grenade for $50 but even these drug dealers wouldn't kill a 6 year with premeditation.


In the same day's paper was an article about the Simmons Bedding Company which has just filed for bankruptcy. It seems that it had been bought and sold seven times in the past decade. In a nutshell (coquille de noix): The buyers were private equity firms which pilloried (derobé) the company by buying it with borrowed money (which then had to be paid back by the company), borrowing more with the company's real equity to pay itself special dividends, then, selling it to next private equity firm in line which did the same thing all over again. I am probably skipping a few other morsels but you get the idea. Meanwhile (cependant) a few thousand workers have just lost theirs jobs (leur boulot) and another great American company has disappeared (a disparu).


These private equity guys are worse (pire) than Kenyans who kidnap children for dollars.


And, do you want to know why?


Because they should know better.